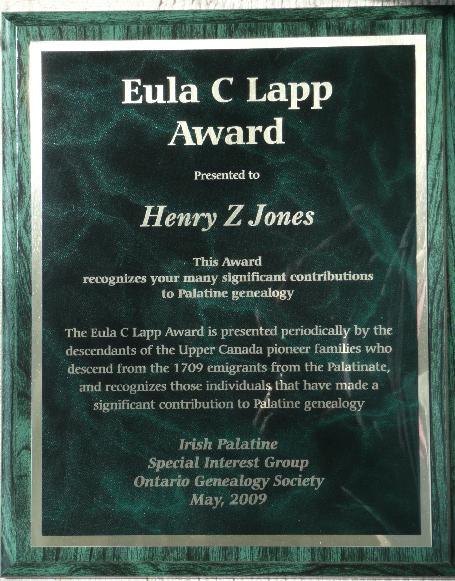 The Eula C Lapp Award is presented periodically by the IP-SIG to an Irish Palatine descendant to recognize his or her significant contributions to Irish Palatine genealogy.  The award is named after Eula Lapp, the author of To Their Heirs Forever which tells the story of the Palatine families who migrated to Ireland in the 1700′s, then to Ireland, finally settling in the Camden Valley, Charlotte County, of present day New York State.  The story focuses on those families who sought a new life in Canada after the American Revolutionary War.

The 2009 winner was Hank Jones.  Hank is a Fellow of the American Society of Genealogists (membership limited to 50 worldwide) and has received the Award of Merit from the National Genealogical Society for Distinguished Work in Genealogy.  He is the author of eight books including The Palatine Families of Ireland and The Palatine Families of New York – 1710 (winner of the Donald Lines Jacobus Prize: Best Genealogical Book of the Year).

The 2013 and third recipient, Austin Bovenizer, has not written a book yet.  But he has been contributing significantly to the story of the Irish Palatines for over twenty years.  A founding member of the Irish Palatine Association in Ireland, he has worked diligently to build its resources since its inception in 1989.  Austin was physically involved in moving a donated building, numbered brick by numbered brick, to a parcel of donated land in Rathkeale, County Limerick.  The result was a new/old building housing the current day Irish Palatine Museum.

Austin has worked long and hard to accumulate resources of the Irish Palatine Association and to spread our story and encourage others to participate in that story.