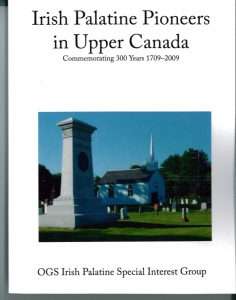 In 2009, the IP-SIG published a hardcover book entitled Irish Palatine Pioneers in Upper Canada to commemorate the 300th anniversary of its members’ ancestors leaving the Palatine area of southwestern Germany in 1709, moving first to Ireland and then to British North America.

The first section of the book briefly describes conditions in the Palatinate in the late 1600s, and why and how these people came to make the trek to Ireland. The section provides information on the locations in Ireland where these immigrants settled, and lists the surnames of the original immigrant families. The section includes information on the visits in the 1750s by John Wesley to the Irish Palatine settlements in Ireland, and his influence on several families as early Methodism developed.

The final section tells the individual stories of some fifty Irish Palatine families who settled in sixteen different counties of Upper Canada between 1784 and 1850. All the family histories include information on the family in Ireland, those who emigrated to Upper Canada and the first generation born here. These stories represent just a fraction of the many Irish Palatines who left Ireland and settled in British North America.

The first edition has SOLD OUT. The second edition can be obtained in soft cover for $30 plus taxes and shipping from the OGS either through the OGS e-Store or by calling (416) 489-0734.